Netflix offers a streaming service that is widely used by people all over the world. With this system, users can watch Netflix on up to four devices simultaneously without having to worry about them being in different locations or running out of storage space for viewing content across platforms. In order to do so, however, you will have access only if you are subscribed under one of certain plans which vary from person-to-person and device-to-device.

Netflix has a limit on how many devices you can watch Netflix on at the same time. The number is 2021. 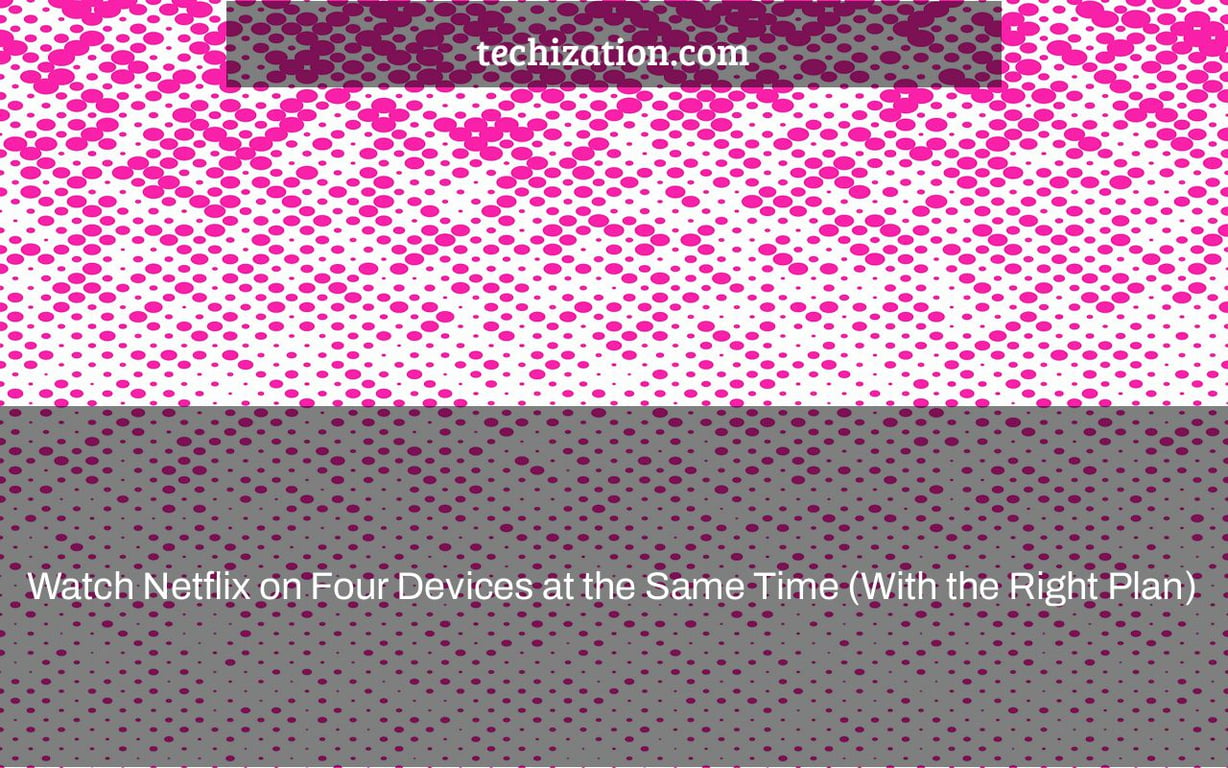 Depending on the package, Netflix customers may watch on up to four devices at once. With so many people using Netflix, it’s important to understand the service’s simultaneous streams policy so that everyone may watch anything they want, whenever they want.

Simultaneous broadcasts are a must-have feature for anybody considering joining up for a streaming service. Despite this, it is often disregarded by customers, who are more concerned with the price. Regardless of how much a plan costs, if it doesn’t provide adequate streams, consumers will have frequent problems.

This is particularly true when it comes to Netflix. When you join up for Netflix, you have the option of choosing from a variety of plans, just like other streaming providers. Unlike most other streaming services, however, the number of devices that may be viewed at the same time differs significantly amongst Netflix subscriptions.

The number of streams is determined by the plan.

Subscribers to the Netflix Premium plan may view on up to four devices at once. Premium, on the other hand, is the most costly Netflix plan presently offered, at $17.99 per month. As a consequence, it’s doubtful that it’ll be the one that most people subscribe to, and it’s much less probable for new Netflix subscribers.

Netflix’s regular subscription allows you to watch on up to two devices at once. This package, which costs $13.99 per month, is significantly more likely to appeal to a wider range of families. It is, however, a more restricted option, since there are only two streams accessible at the same time.

The Netflix Basic subscription only allows you to stream on one device at a time. While this plan has the fewest simultaneous streams, it is also the cheapest, costing just $8.99 per month.

While pricing will play a significant role in the decision-making process, it is not the only element to consider. For example, the basic plan is best suited to single-person homes or those where the service would most likely be viewed on a single television.

The Premium plan, which costs twice as much as the Basic plan, is the ideal option for any family that expects to watch Netflix on more than two devices at the same time.

With two streams to choose from, the Standard plan is a good compromise that should enough for most homes. It’s crucial to remember, though, that gadgets don’t only comprise TVs; they also include smartphones, tablets, PCs, and laptops. With so many access points now accessible, it’s more likely than ever that Netflix will be viewed on many devices at the same time.

Furthermore, these restrictions apply not just to streaming Netflix at home, but also when traveling. Again, the availability of more portable devices that support Netflix is likely to lead to more instances when the quantity of streams is a problem.

When the maximum number of concurrent streams is reached, anybody attempting to access on a different device will see one of the following warning messages:

Family, friends, or roommates will be unable to view Netflix until the other devices have ceased streaming.

More than simply streams are included in the premium subscription.

That isn’t the only change for those still debating if the Premium plan is worth the extra pay for the additional streams. In reality, the Premium package is the greatest Netflix experience available.

The Premium plan, for example, is the only Netflix membership that enables you to watch episodes and movies in 4K UHD. The regular plan, on the other hand, is restricted to HD, while the basic plan is limited to SD.

Depending on the package, Netflix may be viewed on up to four devices at the same time. Basic customers can only stream on one device at a time, Standard subscribers can watch on two devices, and Premium members can stream on up to four devices. These are the absolute maximums, since Netflix does not allow you to increase the amount of streams without also increasing the plan’s total price. Furthermore, the Premium plan cannot be increased any further, with four simultaneous streams being Netflix’s ultimate limit.

While the Premium plan is the most costly overall, the $17.99 price bumps up the number of streams, playing quality (Ultra HD), and the number of phones and tablets (four) that can download movies. As a consequence, the Premium plan will be the ideal choice for any family searching for the most device streams and the greatest overall Netflix experience.

The “how many devices can be logged into netflix uk” is a question that has been asked before. The answer to the question is dependent on what plan you have with Netflix. If you are not sure what plans you have, then it is best to contact your provider for more information.

A: No, you cannot. You must have separate Netflix accounts for each person that uses your account.

How do I watch Netflix on 4 devices?

A: Netflix allows you to stream on 4 devices simultaneously. Use the following steps and it should work for you:
1) Go into your account settings and sign-in with a different email address than the one used to originally purchase your service;
2) Sign out of all other Netflix accounts, including those that were previously tied to this same email address;
3) Return back to the original account (the one without any other active subscriptions), click Manage Account, then switch from Standard plan/subscription type selection back over again to the standard subscription ; lastly, restart your device.
4) Youll be able make up for lost time by watching as much as desired within 60 days!

How do I watch Netflix on multiple devices with basic plan?

A: Netflix does not offer a service for this. However, there are a number of third-party apps that can be used to watch Netflix on multiple devices at once. Of these, the best option is Plex Media Player.

Best Apps to Monitor Kids Phone for Parents In 2021

Passing Arrays to Methods in Java

iPhone Keeps Disconnecting from WiFi After iOS 14 Upgrade? Here how to fix it